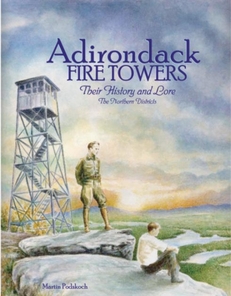 Adirondack Fire Towers:
Their History and Lore, the Northern Districts

Adirondack Fire Towers
Their History and Lore, The Northern District
By Martin Podskoch

During the early 1900s fires swept Keene Valley west of Hurricane Mountain. One fire in 1903 swept north from North Hudson and burned the peak of Noonmark. The fire threatened St. Huberts, Keene Valley and Keene. To protect St. Huberts 250 men dug a trench around the property.

The Forest Fish and Game Commission responded by establishing a lookout station on the bald summit of Hurricane Mountain in April 1910. The observer watched for wisps of smoke in the Giant Mountain wilderness to the south and the Keene Valley to the west. State workers strung 2 ½ miles of telephone wire to the summit. The total cost for the station was $216.64.  The first observer, Joseph Denton reported three fires in 1910. The next year Matthew Ryan reported 22 fires.

For the first decade there wasn’t a wooden tower like there was on most mountains because the observer had a clear view in all directions. The last observer on Hurricane Mountain, Doug Richards, said that when his father was a young boy he used to go up with Archie Hayes, the observer from 1915 to 1919 and there wasn’t a tower then. His grandfather and Archie sat on the cliffs and watched for smokes. When he saw a smoke Archie called the ranger. The telephone was in a wooden box and the line lay right on the rocks.

S. P. Morgan, resident manager of Champlain Realty Company in Plattsburgh, in a letter dated April 27, 1917 to Dist. Forest Ranger A. I. Vosburgh, stated, “I am not sure whether our company owns the summit of Hurricane Mountain, but if we do, you are certainly very welcome to construct an observation station on our land for use in your fire service, and use such timber as suggested by you for the construction of same, and should there be not enough of such timber to build a suitable station you are permitted to use other timber for its construction assuming that you will use good judgment in so doing.” This might indicate that there wasn’t a log tower on the mountain and the company was giving them permission to build one.

In 1919 the state built a thirty-five-foot steel tower to give the observer a better view and protection from the weather. The Conservation Report of 1928 stated that state workers built a new standard size cabin on Hurricane Mountain.  In 1935 the Conservation Department rangers or CCC employees constructed new trails to the fire tower. 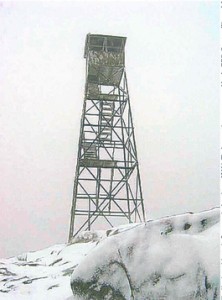 The state officially closed the tower in 1973 because the DEC was using air surveillance.  In 1987 the DEC declared the fire tower surplus property. In December 1995 Thomas Wahl recommended the fire tower be dismantled and removed due to its inaccessibility and remote location. He estimated it would cost $5,400 to use a state helicopter to remove the tower from the mountain.

In September 2001 Tom Martin, regional DEC forester from Ray Brook, said the DEC planned on dismantling the Hurricane Mountain fire tower because it is a non-conforming structure in a “Primitive Area, according to the Adirondack State Park Master Plan. The state planned on having the State Police helicopter transport the tower to the Washington County Fairgrounds for a display.

Tom Martin said, “People will be able to go up it, and we’ll have an informational display in the cabin. We plan to put a map table in the tower so people can view the surrounding area with the fairgrounds located in the center.”

“These towers were built in an era of lots of forest fires,” Martin said. “As more and more roads were put in and the population increased, fire detection involved the general public. Then we found that aerial detection was more effective and cheaper than maintaining towers across the Adirondacks. The fire towers served their purpose for a long time. Now, they’re more useful as recreational tools, as reminders of what things were like in the past.”

I spoke at the Keene Valley Library in the fall of 2004 about the history of the Adirondacks and the local Hurricane Mountain fire tower and the importance of people talking to the DEC, APA, and the state legislature members. David Petrelli of Malone also spoke of his efforts to save the St. Regis fire tower, which was facing removal. He said he and a group of citizens in the Paul Smiths area gathered over 800 calling for the saving of their tower.

Gretna Longware of Elizabethtown decided to lead a group of citizens interested in saving Hurricane Mountain fire tower. She and her husband, Melvin (“Stub”), passed out petitions and ran newspaper stories. After six weeks they gathered almost 2,000 signatures. Gretna attended an APA meeting and spoke about the need to save the tower because of its historical and educational benefits.

In December of 2004 I spoke about the Hurricane Mountain fire tower to Mrs. Joanne Whitney’s fourth-grade and Mr. Konowitz’s fifth-grade students at Keene Valley School. During my talk I asked the students why their tower should be saved. One 10-year old student responded, “Hurricane Mountain fire tower should be saved because it is our heritage.” Another responded, “If it wasn’t for the fire towers, there wouldn’t be the forests that we have today.” Then another said, “What if we have another dry season and the tower is removed. We wouldn’t be able to send someone up there to watch for fires. After my talk they wanted to help save their tower. They took petitions throughout the surrounding communities. In one week they had 242 signatures. They also wrote letters to the DEC Commissioner asking her to help save their tower.

In 1949 Hank McCoy was the observer on Hurricane Mountain. He lived in the small observer’s cabin with his wife Florence and their five children. One August evening Hank stormed out of the cabin after having a spat with Florence and walked down the trail to a lean-to where he could cool off. Then he heard something moving noisily through the woods. The moon was out and as he looked into the woods and saw this huge figure. At first he thought it was a bear but on closer look he realized it was too big to be a bear. Hank’s heart pounded like a bass drum and he ran back to the cabin.

The door flew open and he yelled to Florence, “I got to get my rifle because I just saw this huge animal in the woods and I think he’s coming here.”

He got his rifle from the bedroom and went outside. From the porch he saw a large, dark shadow by a tree about 10 feet from him. He decided that his rifle was no match for whatever it was so he went back inside and put the rifle down. “It’s too big,” he gasped.
Florence said, “Quick, let’s get the kids up in the loft.” 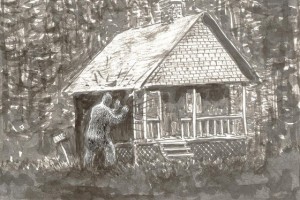 The McCoy family said that one night a huge creature came to the Hurricane Mountain observer’s cabin and violently shook the building. Illustrated by Sam Glanzman

They took the children into the bedroom and told them they had to hide in the loft because there was something strange in the woods. Hank lifted Raymond (13) up and he opened the small door and crawled through. Florence handed Hank the rest of the children: Jerry (11), Donnalee (8), Annalesia (4), and Spencer (2 months). She handed up a milk bottle and diapers for Spencer, and a quilt and blankets for the kids to keep warm. Then she gave them some bread, butter, milk and water.

Hank said, “Be very quiet and don’t come down until we come to get you. Give the baby the bottle to keep him quiet.” Then Hank handed Raymond something heavy to hold down the attic door.

Hank and Florence extinguished the kerosene lamp and anxiously sat on the bed. Hank had his rifle and Florence had the flashlight.

Their bedroom was in the back of the cabin, which was about four feet from the edge of the hill. All of a sudden the cabin began to shake violently. The animal was pushing the corner of the cabin causing waves of terror in the McCoy family. Then the shaking stopped and the animal made a harsh, heavy sound.

They then heard something moving outside their window. Florence stepped to the head of the bed to look out and was shocked to see the dark object right next to the window. Hank moved next to Florence and both moved closer to the window. They saw the animal going down to the foot of the hill. It went around the side of the mountain into the woods and they heard its cries as it went toward Keene Valley.

Florence turned her flashlight on and said, “Kids, it’s safe to come down. They slowly opened the door and trembled as their father lifted them to the floor. Florence hugged each one and assured them that the animal was gone and they were safe.